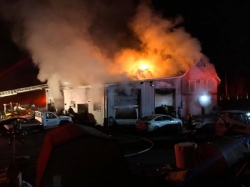 At around a quarter past midnight on 14 November 2019 the Neffs fire team was summoned to a 2nd alarm structure fire in Lehigh Township, Northampton County. Neffs Ladder 1631 responded with a full cre...
➜
News headlines
Fire Safety, from Neffs to State College! 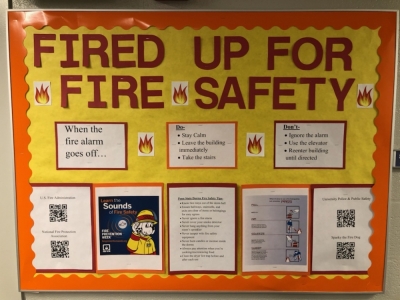 10/18/2021 - State College, Pennsylvania Firefighter Tom Perun is taking the lessons he has learned at the Neffs Volunteer Fire Company and applying them to his new challenge as Resident Advisor at Pe...
➜
More Expansion Photos 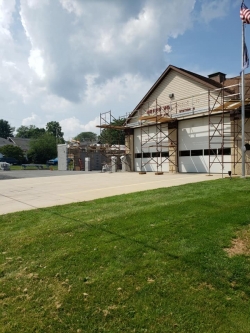 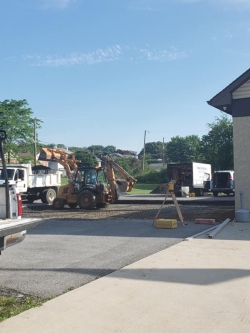 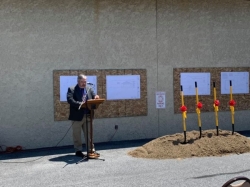 It has been a long time coming but the Neffs Volunteer Fire Company is finally expanding their fire station. The station has 4 pieces of apparatus that are currently housed in double bays. The apparat...
➜
News
Expansion of the Neffs Fire Station

It has been a long time coming but the Neffs Volunteer Fire Company is finally expanding their fire station. The station has 4 pieces of apparatus that are currently housed in double bays. The apparatus are parked 2 deep, therefore, when a call for service comes in, the vehicles often have to be jockeyed around to get a particular vehicle on the road. This slows response time, causes undue wear and tear on the vehicles and increases the chances of a fire fighter responding to a call, being struck by the vehicle that has to be moved out of the way.

A ground-breaking ceremony was held on June 5th with Fire Chief Jim Steward kicking off the ceremony with some opening remarks. State Senator Pat Browne, R-16th, and State Representative Gary Day, R-187th who were both instrumental in helping to secure some of the funds needed for this expansion, also spoke during the event. Pastor Kris Snyder-Samuelson of the Neffs UCC church presented a generous donation toward the building fund and led those in attendance in prayer to cap off the ceremony. Moments later Chief Steward, Senator Browne, Representative Day and fire department president, Ryan Schwartz performed the ceremonial "breaking of the ground".

The actual work commenced on June 9th and is expected to be completed by the end of year. In addition to the 2 new bays, the existing building will receive a new roof, new siding, and thanks to a generous donation from the Trexlertown Fire Department, a "new to us", electronic sign board that will be installed in the grassy area near the current flag pole. 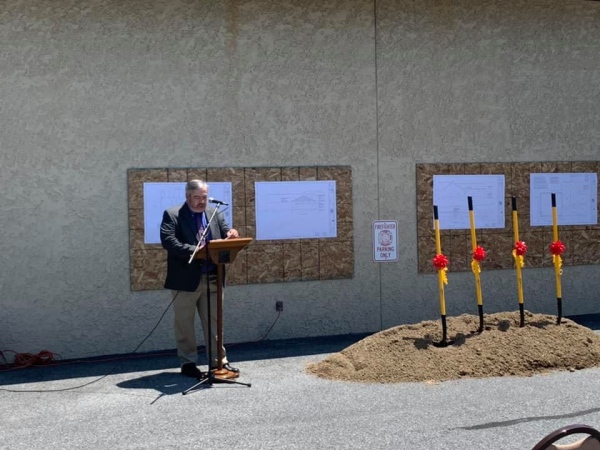 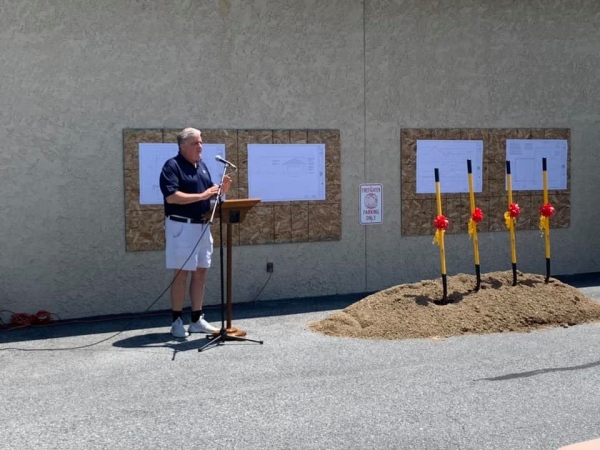 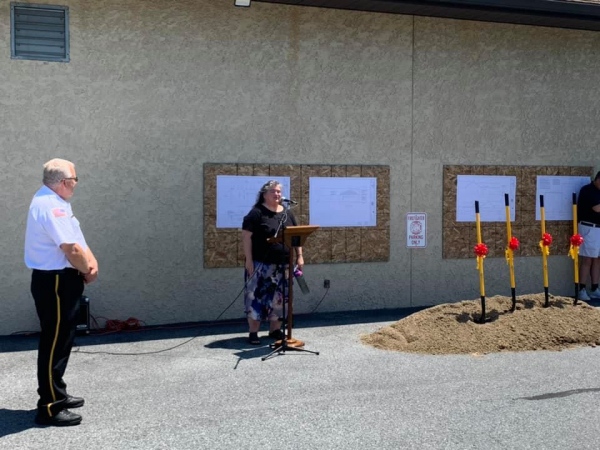 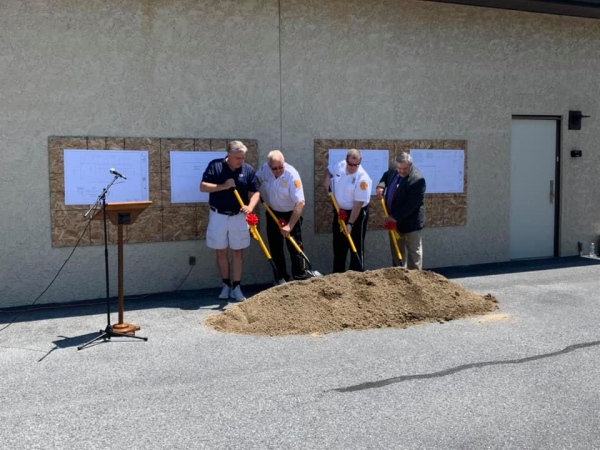 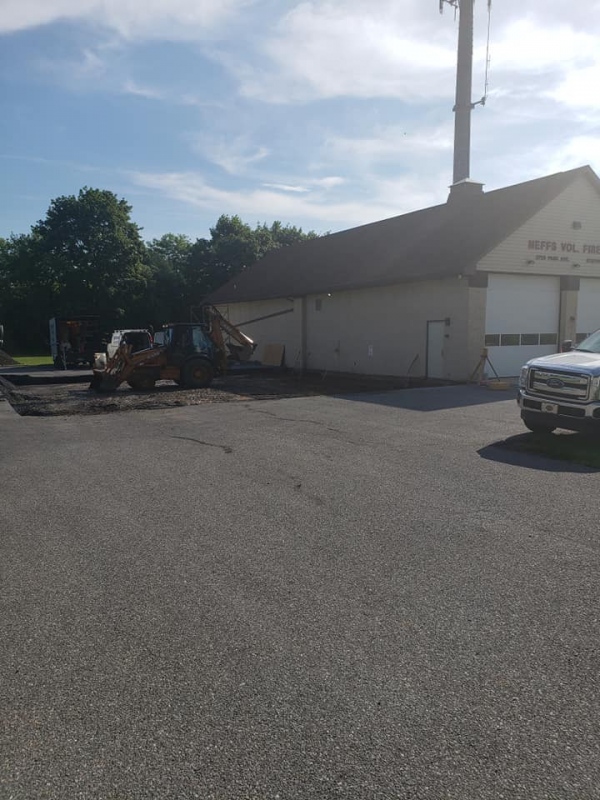 The work has begun!!
×
1 of 1
18 entries in the News
Fire Safety, from Neffs to State College!

10/18/2021 - State College, Pennsylvania Firefighter Tom Perun is taking the lessons he has learned at the Neffs Volunteer Fire Company and applying them to his new challenge as Resident Advisor at Penn State, Main Campus in State College.
➜
More Expansion Photos

It has been a long time coming but the Neffs Volunteer Fire Company is finally expanding their fire station. The station has 4 pieces of apparatus that are currently housed in double bays. The apparatus are parked 2 deep, therefore, when a call for service comes in, the vehicles often have to be joc...
➜
Proposed Bylaws
The link below will take you to the proposed bylaws for the Neffs Volunteer Fire Company. The most notable thing about this draft is the format. They are now in an outline format that makes locating information in the bylaws much easier.
➜
Very Busy Weekend for the Neffs Fire Department 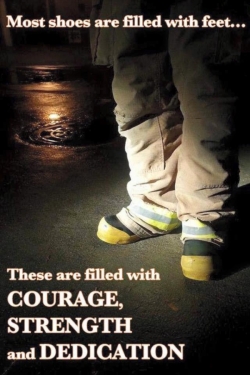 It was a very busy weekend for your Neffs Volunteer Fire Department. Between the 26th and 27th of January 2020 they responded to 5 calls for service. The first call came in at 8:47 AM on Saturday for a motor vehicle crash.
➜
North Whitehall Township Junior Emergency Responder Academy Jun 22-26, 2020 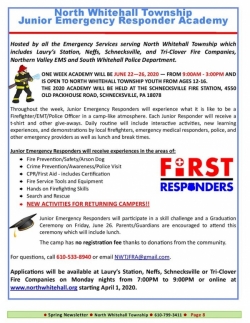 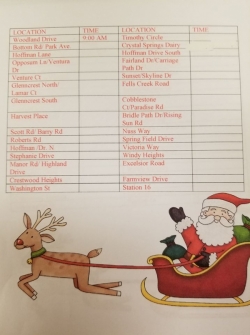 Hi Boys and Girls,In just a few minutes Santa will be leaving the North Pole to start his tour of Neffs. Keep your ears open for the firetruck's siren!! Don't worry if you don't see your street on the list, Santa will find you.Merry Christmas!!!!
➜
A Thank You From The Slatingtin Fire Department 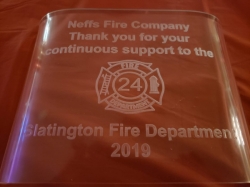 Received honors tonight from the Slatington Fire Department. Mutual aid in the fire service has never been stronger. Always ready and prepared to help each other out.
Santa Clause is Coming to Town!!! 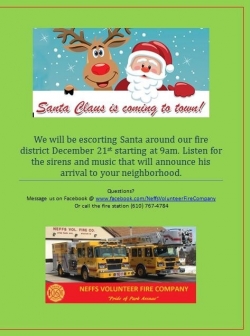 Hey kids, keep an "ear" out for Santa on Saturday December 21st. He will be escorted around the township on a shiny yellow fire truck starting at 9 AM. When you hear the fire truck coming up your street, be sure to step outside and wave to the jolly old elf.
➜
School is starting soon 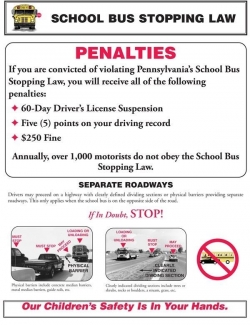 The Parkland School District resumes classes on Tuesday, September 3rd. This means that school buses will be out in force picking up and dropping off our children. Every year children are hurt or worse by inattentive drivers, as they are getting on and off school buses.
➜
Pennsylvania Turnpike Northeast Extension, Route 309 to close for 1 weekend
The Route 309 PA Turnpike bridge reconstruction could cause traffic congestion in and around Neffs. Click the link for more information. http://s.lehighvalleylive.com/yJwPRGb
Front Page!

The members of Neffs Volunteer Fire Company took their turn running the North Whitehall ESO "Wanna Be a Fire Fighter?" obstacle course. Over the evening Station 16 flew the colors from Tower 1631 and put over 125 future recruits through the challenge, sending each home with a helmet to com...
➜
It's appreciated...

Recently the members of Stations 16 and 22 performed a delicate vehicle rescue in the parking lot of Imperial Auto Sales. Though we don't do the job for the glory it is always nice to be recognized.
➜
Santa 2017

On Saturday, December 16th 2017 the members of the Neffs Volunteer Fire Company escorted the Jolly Ole' Elf himself around the fire district. Saint Nick still prefers his reindeer but admits Engine 1611 wasn't a bad substitute for the day.
➜
Neffs firefighters assist at Slatington apartment blaze

The Officers and Members of the Neffs Volunteer Fire Company are excited to announce that we are celebrating our 75th Anniversary in 2017. Stay tuned for more information about an Anniversary Open House this summer!
➜
1 of 1
18 entries in the News
Voluntary Certification
Picture gallery

This site has been viewed 73,138 times.
Calls
News
Events
Pictures
Apparatus
Maintained by the members and staff of Neffs Volunteer Fire Company. Designated trademarks and brands are the property of their respective owners. Copyright © 2006-2022. YourFirstDue Inc. All Rights Reserved. Content on this web site is supplied by Neffs Volunteer Fire Company. YourFirstDue Inc. cannot be held responsible or liable for any content, text, pictures, or any other media found on this web site.
Management login
Powered by